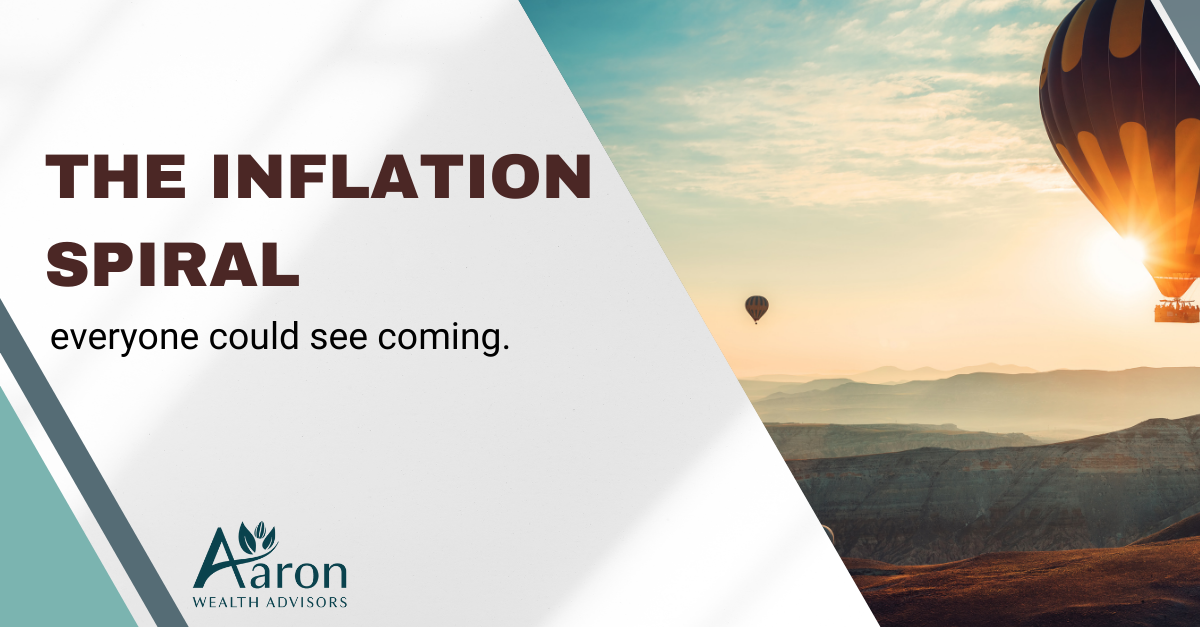 On December 10th, the U.S. Bureau of Labor Statistics released its monthly Consumer Price Index (CPI) report for November. For most, the data
quantified the day-to-day financial changes they had been experiencing for months now. The all-items CPI index jumped 6.8% over the previous
12 months, the largest increase since June 1982.¹ Interestingly, markets responded positively with the S&P 500 closing up nearly 1% that
day,² likely because the number was in-line, rather than above, expectations. The Federal Reserve’s preferred gauge of inflation, the CPI Index
excluding the often-volatile categories of food and energy, rose 4.9% over the same period. We have now experienced an 8-month surge of
increasing inflation from 4.2% in April to November’s reading of 6.8%.¹ 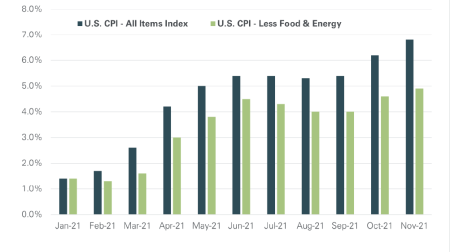 The frequently touted fallacy that price increases would be transitory – based on the argument that supply chain distortions would naturally
resolve themselves as the global economy emerged from the pandemic and year-over-year inflation readings would soon end their measurement
against the depressed levels of the 2020 recession – never held up to even casual scrutiny. Finally realizing the absurdity of the claim, Jerome
Powell officially ditched the “transitory” tag from the Fed’s language and outlook regarding inflation during Congressional testimony at the end
of November. After its December meeting, the Fed also announced that it would hasten its tapering of asset purchases – known as quantitative
easing – and penciled in a potential for three rate increases in 2022 (previously, policy rate increases weren’t expected until 2023). While
this is a step in the right direction, it may be too little too late to contain the problem without inflicting material economic harm. Moreover,
monetary policy is only one component in the morass of government functions which contribute to the overall success or failure of economic
management.

Perhaps the most frustrating aspect of this reality, as investors and individuals, is the lack of recourse available to quickly right the ship when
mismanagement becomes so readily apparent and pervasive. Evidence of inflationary pressures have been mounting for some time now and
warning signs pointing to the increasing risk were glaringly obvious to almost anyone paying attention. To wit, we have consistently sounded the
alarm – along with a multitude of others possessing far greater public prominence – about the growing probability of runaway inflation since the
late summer of 2020. Yet, instead of pivoting when their prior assumptions proved inaccurate, those tasked with managing and crafting public
policy routinely exacerbate conditions by implementing counterproductive or ineffectual programs that further stoke the inflationary flames. But
more on that later…

Part I: How We Got Here
First, some background and context are required to better understand the current landscape. In lieu of a lengthy recitation of technical minutiae,
the four main drivers of inflation in an economy can be summarized as follows:
i. an increase in the money supply
ii. a decrease in the demand for money
iii. a reduction in the aggregate supply of goods/services due to higher production costs (e.g., raw materials, wages, tariffs, taxes, and
other inputs)
iv. an excess in aggregate demand from consumers, businesses, government, or foreign buyers

It would be inaccurate to assume that the genesis of today’s inflationary pressures can be attributed solely to the fiscal and monetary policy
responses of the Covid pandemic. While they certainly doused the fire with an unwarranted accelerant, the dry kindling and embers have
been building to a blaze since the Great Recession of 2008-2009, without appropriate concern. It was then that central banks around the world
began the unprecedented and coordinated implementation of a non-traditional policy – quantitative easing. Through mass purchases of long-term
securities on the open market and zero (or negative) policy rates, the goal of this program was to flood the economy with liquidity, spur
the demand for risky assets, encourage lending, and suppress interest rates. Originally intended to be a robust, short-lived stimulus program
that would jumpstart the economy after a devastating recession, it continued with no end in sight as the ensuing recovery was characterized
by years of tepid growth and low inflation. As a result, U.S. money supply has increased 184% since 2008, with a 37% flood coming since the
beginning of the global pandemic alone.4 For an understanding of the magnitude of the Fed’s asset purchases, its balance sheet has skyrocketed
to $8.8 trillion, or roughly 38% of U.S. GDP, from $922 billion at the end of 2007 and $4.2 trillion in February 2020.5 We mentioned in the opening
section that the Fed’s December decision – to taper asset purchases more quickly and schedule three rate hikes in 2022 – was a step in the
right direction. However, even with these changes, monetary policy is still massively expansionary. With the U.S 10 Year Treasury rate hovering
around 1.5% and inflation running at 6.8%, real rates (i.e., nominal rates adjusted for inflation) are currently -5.3%. What then is the justification
for extending quantitative easing through March 2022? The answer eludes us, but we suspect some degree of cognitive dissonance might be at
play here. 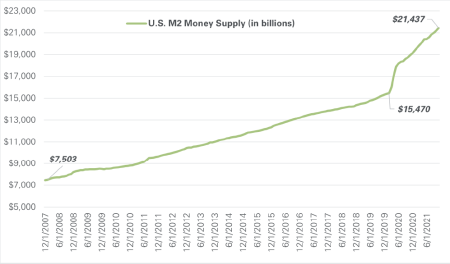 Part 2: Solutions – Ones That Can Work; Others That Definitely Will Not
Duke University professor of political science and economics, Michael Munger, recently described prices as “signals wrapped in incentives.”10
It follows then that price increases reflecting a scarcity of goods, services, and labor might be eased by incentivizing the growth of supply. On
the other hand, policies which goose excess demand further or create greater disincentives to growing supply would have the opposite effect,
that is to spur inflation. Alas, the latter approach has been consistently applied throughout much of 2021 as too much focus has been placed on
generating more demand. Is it any wonder then that we have seen price levels jump nearly 7% recently with no sign of subsiding?
As we alluded to earlier in this section, our proposed solution is simple: “It’s the supply side, stupid.” A policy mix of deregulation, lower taxes,
and pared back government entitlements/benefits could address the inflation problem by incentivizing and eliminating barriers to supply growth,
essentially allowing it to catch up to aggregate demand. While this may seem antithetical to the sensibilities of today’s Democratic party, any
short-term political backlash would likely lead to far greater confidence in the president’s ability to manage the economy – which, according
to recent polls, is quite underwater. At the same time, if successful, this strategy may aide him in wresting back control of the party from his
more progressive flank in order to pursue the moderate agenda on which he campaigned. Furthermore, it has the added benefit of not forcing
policymakers to suppress demand. Demand side interventions – such as large, swift interest rate hikes and significant fiscal policy tightening –
should be viewed as a last resort to curbing lingering inflation given their historical propensity to cause recessions (like in the 1970’s). Though,
obviously, a prudent and measured reduction in stimulative monetary policies is necessary. To be sure, other mechanisms recently proposed –
government price control boards, corporate investigations, increased supply chain regulations – will not only be ineffective, but likely harmful to
the economy.

Conclusion
We have learned time and again throughout history that governments cannot wish away inflation through the ham-fisted regulation of its
symptoms. Rather, the underlying structural issues must be attenuated. While we will continue advocating for such an approach, as investors we
must still prepare for the scenario that no such resolution will come about. Thus, out of prudence and realism, we will remain active and vigilant
in protecting client portfolios from the potential negative impacts of further inflation.

Disclosures
*Aaron Wealth Advisors LLC is registered as an investment adviser with the Securities and Exchange Commission (SEC). Aaron Wealth Advisors LLC only transacts
business in states where it is properly registered or is excluded or exempted from registration requirements. SEC registration does not constitute an endorsement of
the firm by the Commission nor does it indicate that the adviser has attained a particular level of skill or ability.
*This material is not intended to be a recommendation or investment advice, does not constitute a solicitation to buy or sell securities, and is not provided in a
fiduciary capacity. The information provided does not take into account the specific objectives or circumstances or any particular investor or suggest any specific
course of action. Investment decisions should be made based on an investor’s objectives and circumstances and in consultation with his or her advisors. The
information contained in this presentation represents factual information, analysis, and/or opinions regarding various investments. Any opinions expressed in this
material reflect Aaron Wealth’s views as of the date(s) indicated on the Presentation and are subject to change.
*Past performance may not be indicative of future results. Therefore, no current or prospective client should assume that the future performance of any specific
investment, investment strategy (including the investments and/or investment strategies recommended by the adviser), or product made reference to directly or
indirectly, will be profitable or equal to past performance levels.
*This document contains forward looking statements, including observations about markets and industry and regulatory trends as of the original date of this
document. Forward looking statements may be identified by, among other things, the use of words such as ”expects,” “anticipates,” “believes,” or “estimates,” or the
negatives of these terms, and similar express results could differ materially from those in the forward looking statements as a result of factors beyond our control.
Recipients of the information herein are cautioned not to place undue reliance on such statements. No party has an obligation to update any of the forward looking or
other statements in this document.
*All investment strategies have the potential for profit or loss. The investment strategies illustrated in this document and listed above involve risk, including the risk of
loss of principal.
*The firm is not engaged in the practice of law or accounting. Content should not be construed as legal or tax advice. Always consult an attorney or tax professional
regarding your specific legal or tax situation.
*This material is proprietary and may not be reproduced, transferred, modified or distributed in any form without prior written permission from Aaron Wealth
Advisors. Aaron Wealth reserves the right, at any time and without notice, to amend, or cease publication of the information contained herein. Certain of the
information contained herein has been obtained from third-party sources and has not been independently verified. It is made available on an “as is” basis without
warranty. Any strategies or investment programs described in this presentation are provided for educational purposes only and are not necessarily indicative of
securities offered for sale or private placement offerings available to any investor.