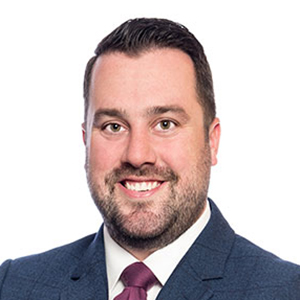 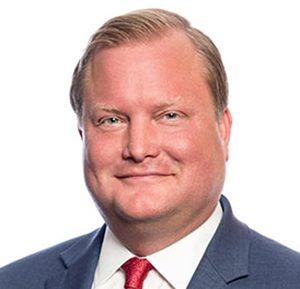 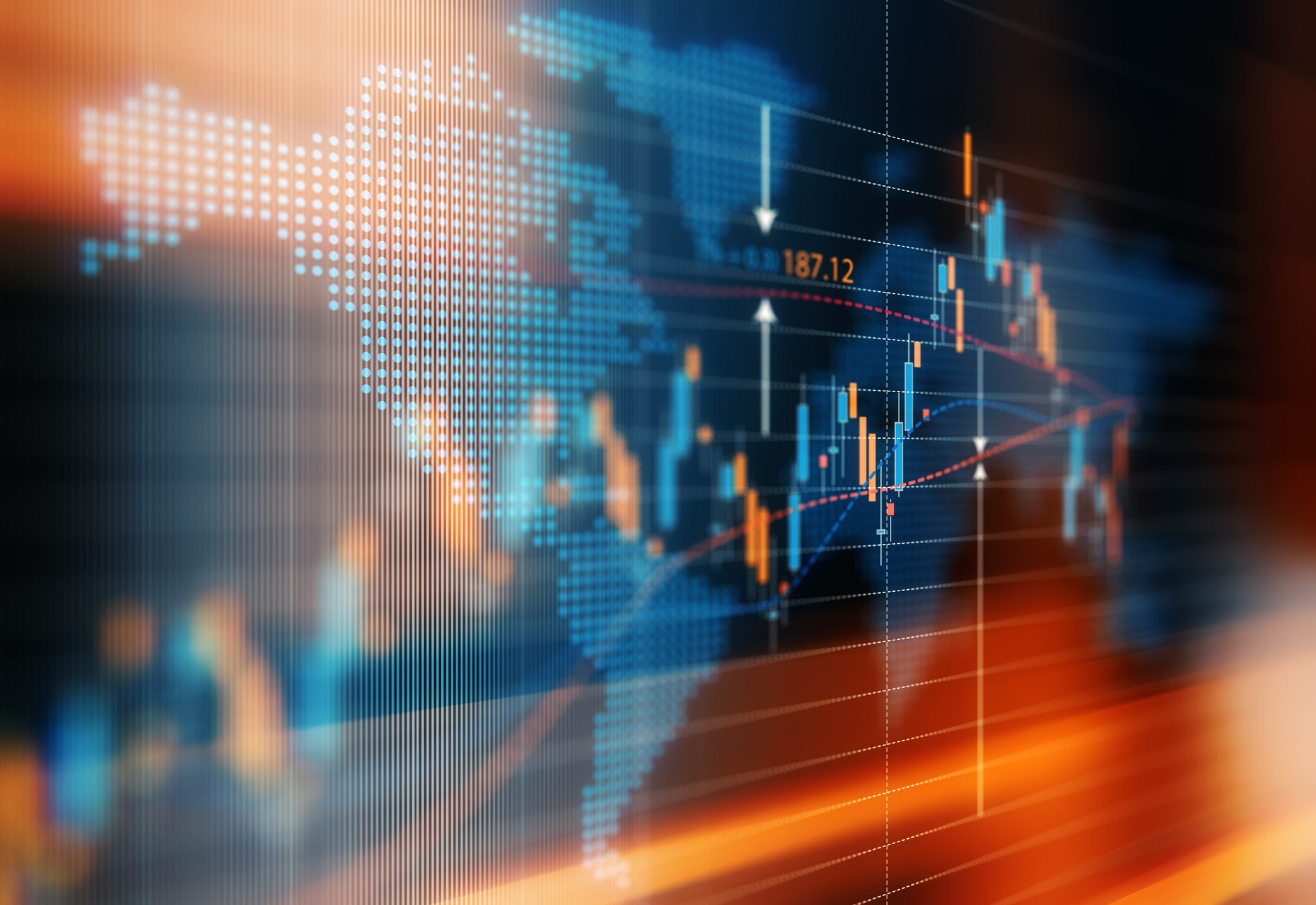 Asset prices continue to reflect a blend of positive (employment and consumer strength),neutral (corporate profits beating expectations but not growing year-over-year), and less positive (manufacturing data and capital expenditure) readings in the economy, supported by an accommodative monetary policy from the Federal Reserve and other central banks. The landscape of positive but slowing economic growth does not lead us to a draconian conclusion that recession is imminent but does indicate that we are later in the cycle. With this backdrop, and mindful of the decade-long expansion in the U.S. economy and the concomitant rise in stock and bond prices (U.S. equity markets are at or near all-time highs), our investment stance is one of caution and conservatism.

Market movements and economic developments throughout 2019 have predominantly traced the path of the expectations we have outlined in our previous communications. We do not highlight this to imply we have some crystal ball – surely the current level of uncertainty across the geopolitical and investment landscapes make the forward-looking view quite blurred – but instead, we track these views and outcomes in order to provide greater transparency of our investment philosophy and process.

In our early January 2019 paper, “Stepping Back From the Cliff’s Edge”, we argued that the market sell-off in Q4 2018 was largely overdone and the drastic reversal of market sentiment would be short lived. After all, the economy was still showing signs of robust growth and a firm fundamental footing. Sitting in our chairs at that time, we believed the spike in volatility would be brief and provided an attractive entry point for disciplined and pragmatic investors. What we then experienced was the best 4-month start to a year in the past two decades. Every major equity market segment posted double digit gains.

By May 2019, in our paper entitled “When the Music Stops, Who’s Going to be Left Holding the Bag?” our outlook shifted as substantial risks began to crystalize more fully. Specifically, our primary concerns that we viewed as significant threats to continued market and economic expansion included: 1) increasingly protectionist trade policy via tariffs of the current administration; 2) the ongoing and intensifying U.S.-China trade war; and 3) the 2020 U.S. Presidential Election coupled with the normalization of extreme and economically destructive policy agendas. Still today, we do not believe that the markets or broader investor population are adequately pricing in these very real risks – risks which carry material probabilities of negative outcomes. Much of this is evident by the persistent pattern of markets trading on daily headlines, often overweighting positive news while ignoring those items which point to a bleaker future. In short, our view could be broken down into two stages, demarcated by the tightly corresponding timelines for the ultimate resolutions (positive or negative) of the aforementioned risks:

After all, it is most often an ill-advised policy decision that brings about recessions. Having the foresight to evaluate and plan for these potential headwinds doesn’t require clairvoyance or a doctorate from an Ivy League school. Simply put, in the words of James Carville, “It’s the economy, stupid.”

With the first report of 3Q19 real GDP at +1.9% and 4Q19 projected to come in by the AtlantaFederal Reserve and the New York Federal Reserve at +0.3% and +0.4%, respectively, growth has been slowing in U.S. manufacturing — the October Chicago PMI, at 48.3 signaling contraction, weakened to its lowest level in 4 years — exports, capital expenditures, leading indicators, and the Cass Freight Shipping Index; in Germany; and in China’s retail sales, fixed asset investment, and industrial production. At the same time, the October jobs report showed+128,000 jobs (versus much lower estimates), the previous two months’ data were revised upward by 95,000 jobs, unemployment remains at a very low 3.6%, average hourly earnings are growing at +3.0% year-over-year, and the average work week has been holding steady at 34.4hours. Despite slowing growth, these positive labor statistics support a healthy U.S. consumer as evidenced below by a softening but still elevated reading of consumer confidence. 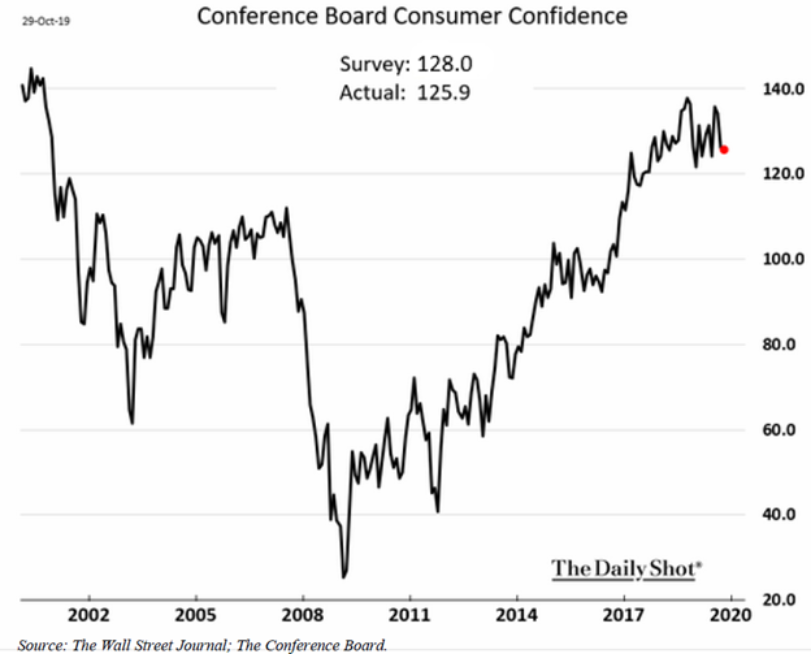 Although we do not expect an imminent recession, we are mindful that for each of the past five recessions, the officially declared onset of the economic downturn came 5 to 14 months after the recession had actually begun, indicating that it is often challenging to discern when a recession has come upon us. The chart below illustrates the length of time between the recession’s actual onset and when the recession was declared to have begun by the National Bureau of Economic Research. 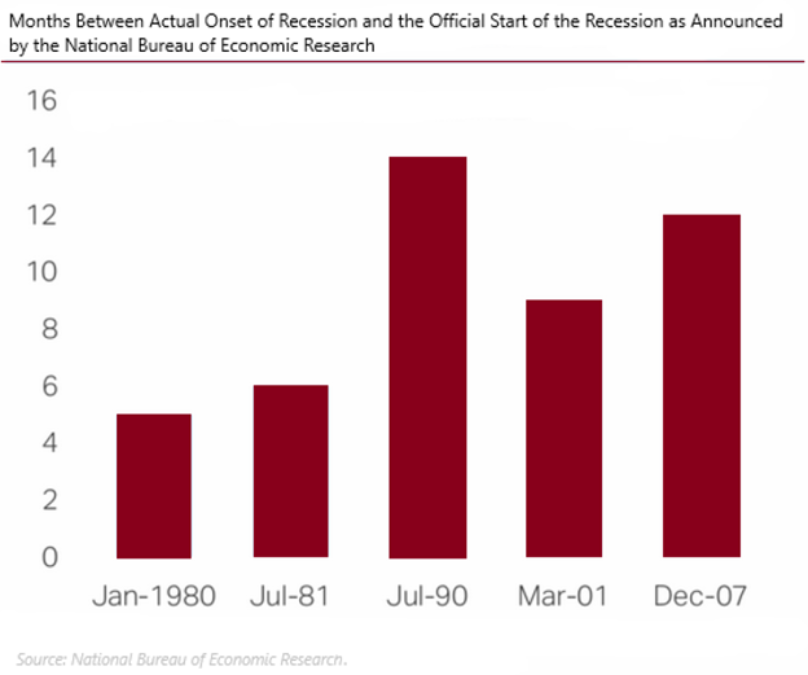 On a year-over-year basis, S&P 500 profits have declined in the first and second quarters of 2019, and the third-quarter as of November 15 is projected to show a decline of -2.3% (companies beating their estimates and/or reporting an optimistic outlook have been rewarded — such as Procter & Gamble, GE, United Healthcare, Biogen, Alexion, Pfizer, Merck, and Mattel), and companies falling short of their estimates have been punished (including Caterpillar, McDonald’s, Texas Instruments, Travelers, and Eli Lilly); analysts and strategists have been paying particular attention to CEOs’ and CFOs’ rather mixed comments about the revenue and profits outlook for the fourth quarter of 2019 and calendar year 2020.

In U.S. equities, it is worth remembering that a secular bear market transpired from the dotcom crash of 2000-2001 through the Great Financial Crisis of 2008-2009. Then, what we consider to be the 8- to 9-year initial phase of a secular bull market began, from the washed-out, demoralized lows reached in March 2009, with price pullbacks occurring in 2010 and 2012 (sparked by European debt worries); in 2014 (due to collapsing oil prices); and in 2016 (set off by a China GDP growth scare).

After having declined 14% from early September through Christmas Eve 2018, U.S. equities (represented by the S&P 500 index) have risen +24.5% year-to-date through November 15th, 2019, led by a concentrated group of mega-cap technology stocks, (especially Apple +68.5%;Microsoft +47.7%; Facebook +48.8%; and Google +27.6%) with the S&P 500 setting more than 20 all-time records on its march higher this year. The sizeable market capitalization share of the 10 largest companies as a percentage of the S&P 500 total market capitalization is shown in the below chart and although not at a record, is well above its 30-year average and does represent a cause for some degree of concern. 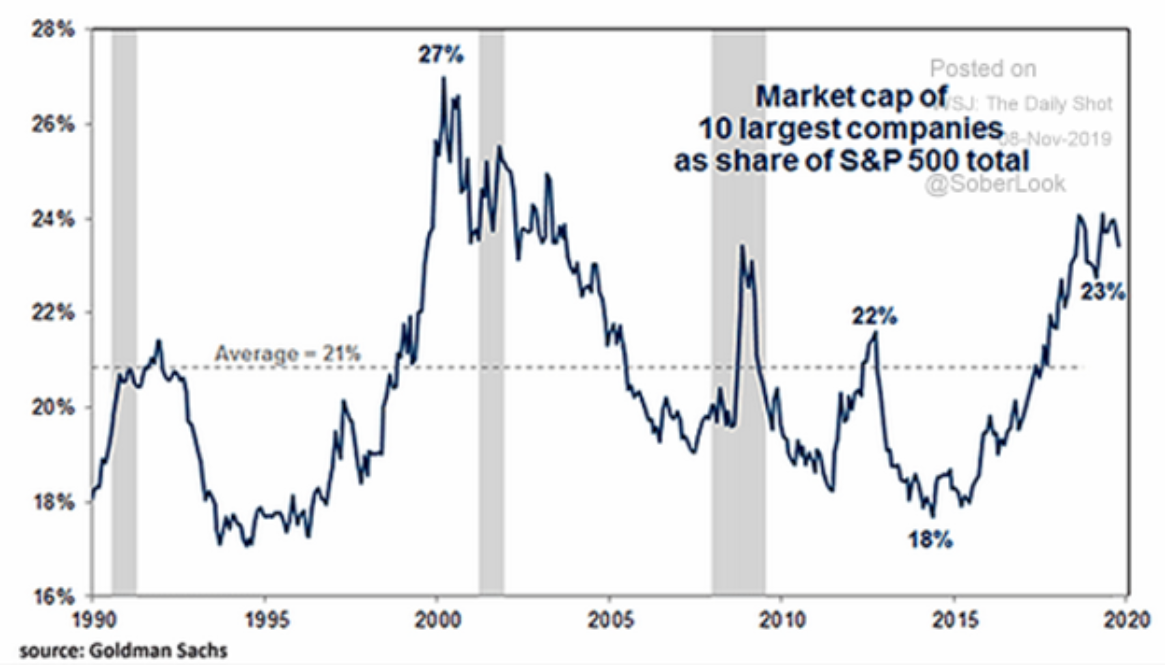 We tend to be strategic in our investment positioning by keeping a well-diversified asset allocation to be held over the long term. Given the inherent difficulties of tactically timing the swings in stock market prices, the chart below demonstrates the strategic wisdom of selecting and holding high-quality positions as the difference in portfolio performance from missing just a few “best days” (which often follow meaningful market selloffs). With that said, we have begun to incorporate some medium-term, tactical strategies within portfolios to account for the binary environment we expect to see and to potentially mitigate downside risks should conditions deteriorate. And, as always, we are constantly vigilant of potential pitfalls that can be brought about in periods of market exuberance and exposed during the ensuing crash. 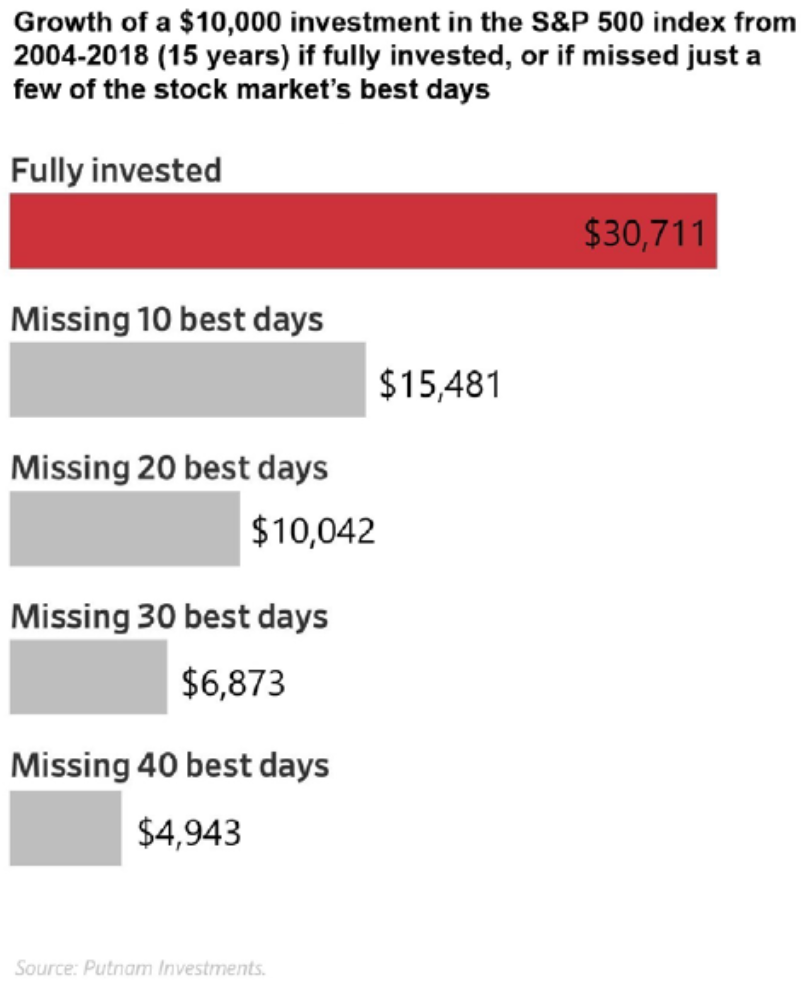 *Aaron Wealth Advisors LLC is registered as an investment adviser with the Securities and Exchange Commission (SEC). Aaron Wealth Advisors LLC only transacts business in states where it is properly registered or is excluded or exempted from registration requirements. SEC registration does not constitute an endorsement of the firm by the Commission nor does it indicate that the adviser has attained a particular level of skill or ability.

*This report is a publication of Aaron Wealth Advisors LLC. Information presented is believed to be factual and up-to-date, but we do not guarantee its accuracy and it should not be regarded as a complete analysis of the subjects discussed. All expressions of opinion reflect the judgment of the author as of the date of publication, are subject to change, and may not be the opinion of Aaron Wealth Advisors

*Information contained herein does not involve the rendering of personalized investment advice but is limited to the dissemination of general information. A professional adviser should be consulted before implementing any of the strategies or options presented.

*All investment strategies have the potential for profit or loss. The firm is not engaged in the practice of law or accounting. Content should not be construed as legal or tax advice. Always consult an attorney or tax professional regarding your specific legal or tax situation.

*This material is proprietary and may not be reproduced, transferred, modified or distributed in any form without prior written permission from Aaron Wealth Advisors. Aaron Wealth reserves the right, at any time and without notice, to amend, or cease publication of the information contained herein. Certain of the information contained herein has been obtained from third-party sources and has not been independently verified. It is made available on an “as is” basis without warranty. Any strategies or investment programs described in this presentation are provided for educational purposes only and are not necessarily indicative of securities offered for sale or private placement offerings available to any investor.